There are many different microphones that would work for a snare. Shure, it feels like, has a monopoly on the perfect instrument microphones. Their SM57 microphone is one of the best microphones. It is perfect for almost any scenario, and the snare is no exception. I used an SM57 as the bottom snare microphone, and I very well could have used one on the top as well, but I chose to use a Telefunken M81-SH. Telefunken, much like Shure, produces excellent quality microphones, and the M81 is no exception. The M81 is designed more for a snare microphone, and the SH (short handle) version is explicitly designed for this. I like the sound that it produces to the sound of an SM57, but that doesn’t mean that it is better.

The way to mic up the snare is fairly simple. The top microphone, if there is a clip for it, you can just clip straight to the rim of the snare.

I like to put it under the Hi-hat facing the center. I like it to be angled so that it is more pointing at about 20% away from the dead center. This helps to angle to field of response more to the head of eh drum rather than what might be happening on the other side of the drum, like the floor tom. There are many different make/models of microphone that would work for a top snare microphone — Shure SM57, Audix i5, Telefunken M81 or M80, Earthworks DM20. A budget option is the Audix i5. This microphone is pretty good for how cheap the drum microphone packages that it comes in is. The SM57, is the standard. It is not much more expensive at $100 USD at the time of writing, and it is good. The Earthworks DM20 is the most expensive of the lot, and it can be worth it at $350 USD at the time of writing. If you are going to be spending more than $100 USD on these microphones, do your research and it is purely paying for the sound desired and the brand affiliated with that microphone.

The way to mic up the bottom of a snare is simple. Put a mic under there on a stand.

I like to angle it upwards at the bottom skin in order to get a selection of different sounds under the snare. Sticking it straight up will heavily mic one portion of the skin, but not the rest of it. Again, a multitude of microphones could be used for this, but just about everyone agrees that a Shure SM57 is standard. Any microphone with a similar polar patter, and a similar frequency response could be used, but Shure pretty much owns this microphone type. It is very important to remember to flip the polarity on this microphone. Most consoles have a button that looks like this:

Some consoles will call it the phase button, or the polarity button, or the invert button, but the basic concept takes us back to mathematics, trigonometric functions, and sin waves. If we pretend for a moment that a snare drum emits one singular sound wave (it doesn’t but let’s pretend), then the top mic will pickup something like this: 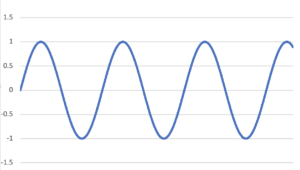 Which means the bottom mic gets this: 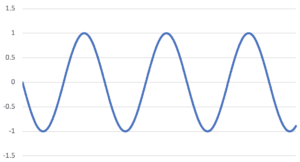 Oh dear. They are fighting each other. Oh no, what are we going to do? We will flip the polarity. This will make them sum from being opposites, to the same. Because we are micing both sides of the drum, we need to remember that the polarity of the bottom one is 180 degrees off. This is destructive interference. Flipping the bottom one changes it to be constructive interference. These concepts will come back to haunt us throughout the drum kit.

Getting the Best Drum Sounds in a Small Venue by Benjamin Pyke is licensed under a Creative Commons Attribution-NonCommercial 4.0 International License, except where otherwise noted.